Well that was decidedly harder than I had expected.

After my big touring days, I thought that 108km with 1500m of elevation gain without luggage would be relatively straightforward. I also had delusions that my Cyclocross bike with knobbly/ touring tyres would be equally as fast as a road bike. It seems this was not the case!

I woke up before my alarm, and was ready early so I got to the start line early and got a position quite close to the front.

Right from the start we had hills. My legs were feeling a bit heavy and I could feel the accumulated fatigue from the last week. But I knew there were not many women in front of me and I wanted to keep it that way, so my pace up the hills was a much higher effort level than what I’d been doing for the past week at touring pace 🤣

I kept this up for about the first 30 minutes, then we got to a proper long climb and I settled into a tempo pace that I could sustain. I realised that I’d probably been a bit over-enthusiastic with my initial effort level.

By this point a bunch of riders had passed me and this continued to be the case throughout the ride. Every so often someone would ride with me for a while and chat, which is always one of the highlights of this sort of event. 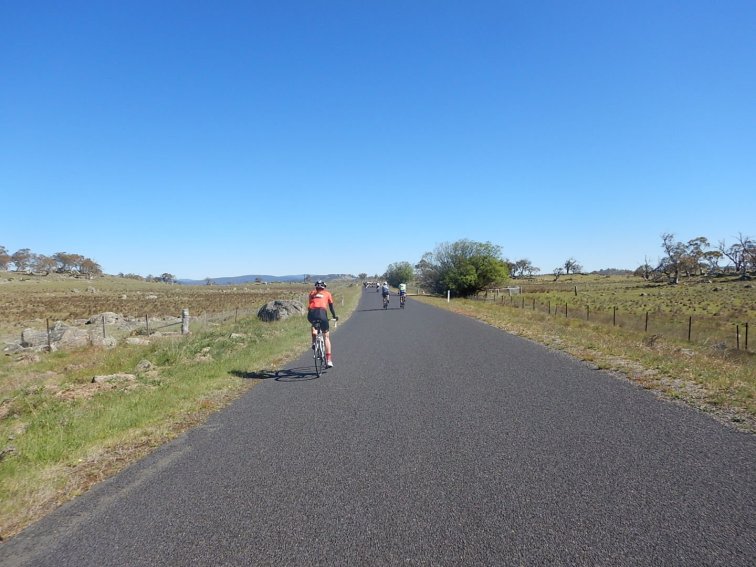 It was at this point that I started to feel moderately awful, and the feeling continued pretty much the rest of the ride until the Col de Beloka. I couldn’t exactly put my finger on why I felt crap. I was drinking enough, I had a few things to eat and that didn’t help. My right glute felt a bit tight and over-used but not crampy. Otherwise, my legs actually felt fine.

In the end, I decided it was a combination of the altitude (750-1200m throughout the ride) plus the heat (maximum 36 degrees, but even the bulk of the ride in the high 20s was way hotter than sub-10 degrees that I’d been riding in for the past week) plus my accumulated fatigue, plus going too hard at the start. So I attempted to settle into some kind of rhythm and recover from my earlier efforts.

I decided not to stop at the first feed station, as there were so many people stopped and I had plenty of food and water. This was also a great chance to get back in front of some people 😀

By now I was counting down the kilometres and it was still 50km to go! It helped to break it into sections – 25km or so to the base of the big climb, do the big climb, then 20km or so back to Jindabyne mostly downhill (or so I thought!).

The crowds on the roadside were fantastic, I appreciated that it was a very long and hot day for them as well, so I tried to wave to them all and especially the kids. I got through the towns of Berridale and Dalgety, then I decided I really needed to get off the bike and stretch. Boy it felt good! Soon I saw a sign indicating 5km to the next feed station. Hooray! I decided I needed some sugar and anything I could get with caffeine, as well as some salty chips. I had some banana, a couple of snakes, several handfuls of chips, and half filled my water bottle with coke. Thank goodness for the black magic!

I knew that Col de Beloka was coming up soon, but I’d been a bit lazy in my ride preparation so I didn’t actually know how far away it was. I could see a big climb coming up and thought: finally we are there! But no, this wasn’t steep enough. It was just another long climb. Then I saw the signs, it was still a few kilometres until Beloka.

Right before I started the climb up Beloka two kangaroos jumped across the road in front of me. Good thing they were a little way in front so I just had to slow down. By this time it was literally the middle of the day and 35 degrees so I did not expect to see wildlife!

I start the climb up Beloka, get into my easiest gear and just focus on pacing myself, picking the least steep line, keeping my breathing steady and trying to relax my hands and shoulders. In between all this, it didn’t take long to realise that practically everyone else was walking up the climb. There were about three other people I saw riding, and even them I caught and passed. I wonder how they felt being passed by a chick with knobbly tyres on her bike. I have to say, I felt very happy to be riding. I kept coming back to my little mantra: I am a lean mean cycling machine. I’m faster and more efficient cycling than walking.

I was very grateful for the reprieve in the middle of the climb to catch my breath and get my heart rate back down. The second half of the climb was also steep, but didn’t seem quite as extreme as the first half.

I knew there was another feed station at the top of the climb, but with my high heart rate and the extreme heat, I thought that if I stop I’ll be in trouble. Coming up the climb I was dripping sweat everywhere. I got some in my mouth and it tasted like pure salt, more salty than sea water. After the ride I saw my face and my gloves were covered in salt strain, more than any other ride I’ve done. Incredible.

So at the top of the climb I sprayed my water bottle on my head and back, which cooled me off, then I kept going. It was only 20km. And mostly downhill.

Ha! There were a lot of fun downhill bits, but there were also two to three more long climbs to do. I just kept within myself, and actually the feeling of awfulness that I’d had most of the ride was now gone. So I enjoyed the last section a lot more. And after all the riding I’ve been doing I’m feeling confident on this bike descending even at speed.

Finally we turned in Jindabyne and reached the finish line. I was in no way tempted to turn left and do an extra 62km up to Perisher and back down. Kudos to those who did!

I’m very pleased that I decided to do the ride instead of the race, particularly considering what bike I was on and the amount of riding I’ve done in the last week or more. Although I had been looking forward to the ride, it was probably the least enjoyable of all the rides I’ve done this trip – probably due to the challenging weather conditions and my poor pacing at the start. Feeling like everyone is passing you all day is way less fun than just riding by yourself at whatever pace works for you at that time. I did enjoy riding and particularly descending on fully closed roads all day though! And there was great support for the riders from the community and the event organisation throughout the day.

If at first you don't succeed, try again. After some YouTube research on waffle making technique and using a different recipe, today I succeeded in making Belgian waffles. They look just like they are supposed to, they are crispy and taste pretty ok (although that may have been the ricotta and strawberry jam influence). Can't hold me back now! #perserverance #waffles
An absolutely outstanding two days of cycling, from Perth to York (140 km day 1) then back to Perth (100 km day 2). The weather was excellent - non freezing, non torrential rain, non windy. There is something to be said for "mild", particularly when you've got great kit to keep you dry and warm during the old sprinkle. The route was really great. Around half off-road and the rest mostly on quiet back roads. We had done a lot of sections before, but there were a few new bits on day 1, and the first half of day 2 was all new. I had some expectation that it would be rocky singletrack but it was almost all easily rideable double track. Plus a few adventure bits of unexpected puddles and trees down. Always fun to get out and explore new routes! The scenery was also relaxing, particularly on day 2 which was initially through farmland (cute lambs) then bush with lots of birds and pretty plants. And of course let's not forget the food. I had a donut for lunch two days in a row, enough said. Oh and a custard slice on the second day. Toodyay Bakery was a revelation and is well worth a visit. Happy to be finished before dark both days and now with a public holiday Monday to recover! #bikepacking #supportlocal #supportsmallbusiness
First attempt at making waffles didn't go so well. #waffles #bikesnacks
The early and very chilly start to the morning was worth it for DINE IN BREAKFAST! Coffee in an actual cup with a spoon to eat the froth on top. @lotsixzeroyokine #supportlocal #supportsmallbusiness
Super excited to get my first @dinnertwist meal box today - it was like Christmas but without all the wasted wrapping paper! Tonight's menu selection was sesame crusted fish (blue groper no less) with roasted veg and spring onion yogurt sauce. A flavour sensation and I'm branching out by eating a few things I don't often do (like spring onion and beetroot). It was also ready in under 40 min from start to digging in! Great to see minimal plastic packaging in the box, and the foam boxes can be returned with the next delivery for reuse. Protein serves are generous, lots of fresh veg, and at around $10 per serve it is cheaper than takeaway. #dinnertwist #healthyeating #fastfood
Build it and they will come. The new 40 km or so bike path out to Muchea opened last weekend and it has been busy with cyclists ever since. I don't think the Muchea general store knows what has hit it, as the only source of sustenance within some considerable distance. Thought we'd head out today for a cruise... 40 km into a 20-30 kph headwind, thankfully we had the tailwind on the way back and got to cruise along at 30-40 kph. Real coffee and real food from @smoultslarder at the finish was a delight.
Another big ride day today! All in the Perth region, so we didn't cross any regional borders. From Maylands to Baldivis via 7 Dams and 16+ climbs: Mundaring, Victoria, Canning, Churchman Brook, Wungong, Pipehead and Serpentine. 215km all up with 3000m of gain. It was really all about the food stops and photo stops at the Dams. 6am start and 8pm finish them train back to Perth. A really fun day and great to do on a long weekend when I can spend all day Monday recovering!
%d bloggers like this: