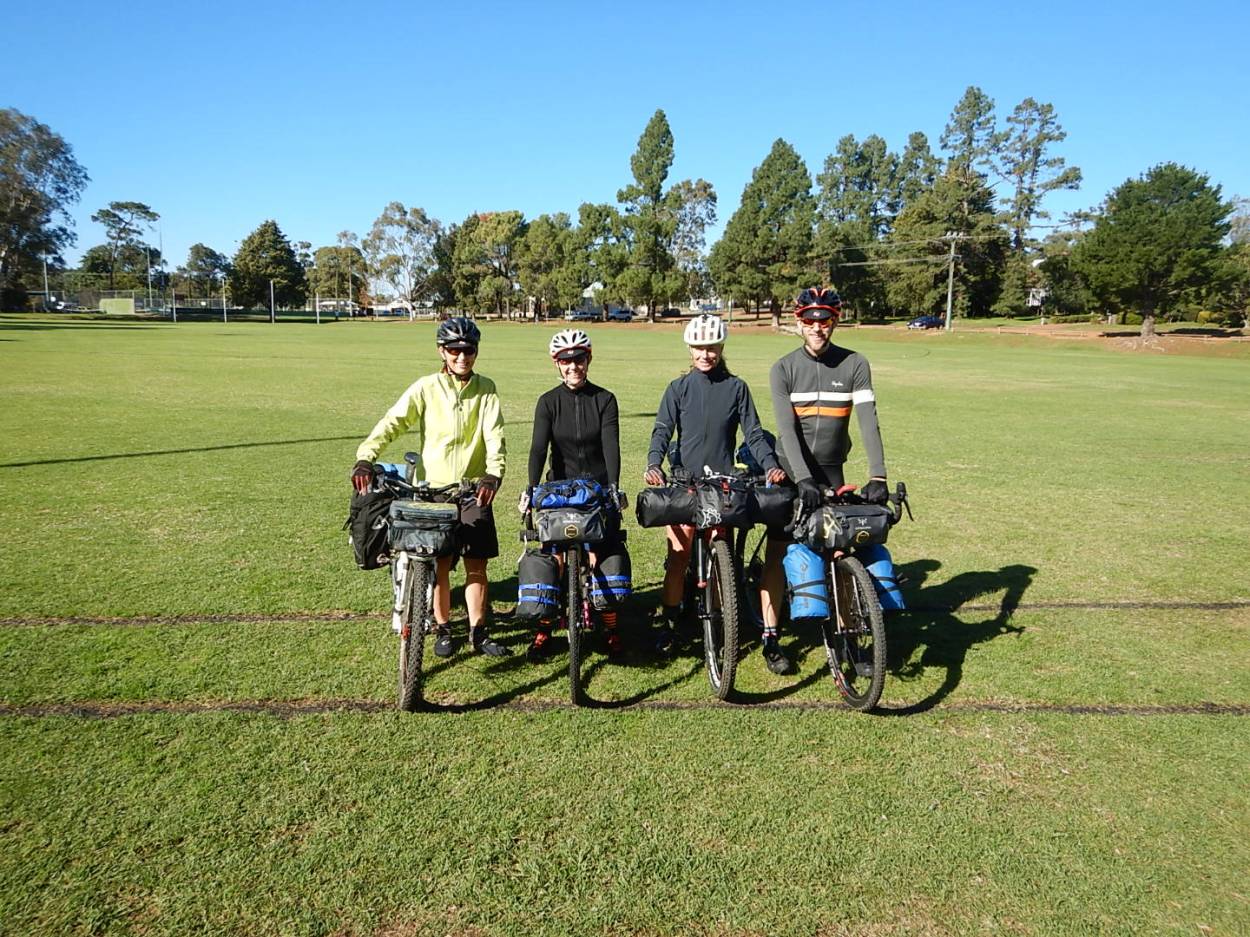 The Swift Campout is an event that originated in the Northern Hemisphere. The idea is to get out on a weekend close to the solstice…. in the North Hemisphere, this is the summer solstice when there are maximal daylight hours and probably good weather. In Australia it is winter solstice with shorter days and higher risk of adverse weather – that just makes it more of an adventure! 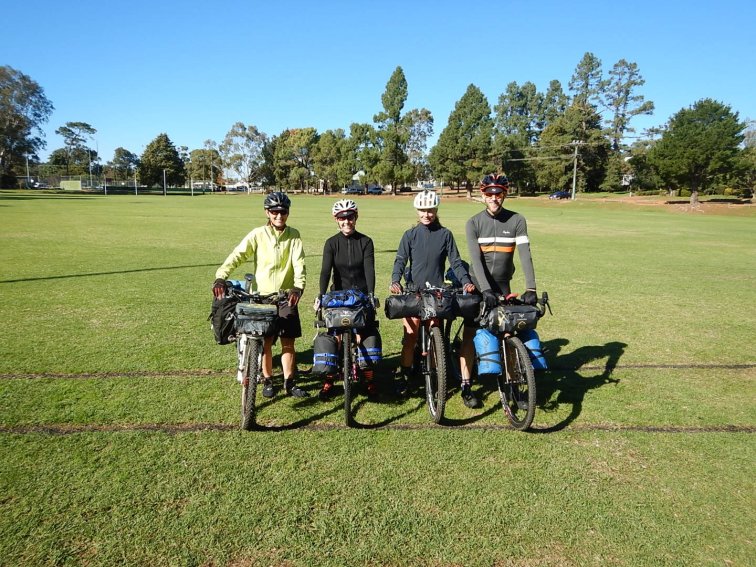 For the Swift campout this year, the Four Amigos got back together and we took ourselves out to Avon Valley National Park, on a route I’d been wanting to do for ages.

We headed off on Saturday morning at 11am, after a coffee and snack at the local Darlington cafe. Although it is mid-winter here and it has been very rainy and cold for a few weeks, this weekend we had idealic weather conditions. It was sunny and around 23 degrees C both Saturday and Sunday, and I think I even got a bit sunburnt!

So we took off from Darlington, down the hill to the Swan Valley, and headed north along mostly quite-ish roads. Our toughest climb for the day was from the cafe up Darlington Rd, so we got that out of the way early and warmed up quickly!

After about 25km on bitumen, our route reached Bells Rapids, and this is where we headed off on the gravel. Our track was relatively good quality gravel road, but with enough undulations, corrugations, loose gravel and pot holes to keep us focussed on the task at hand. We also made sure to take plenty of stops to enjoy the view, out over rolling green hillsides and alongside the Avon River. 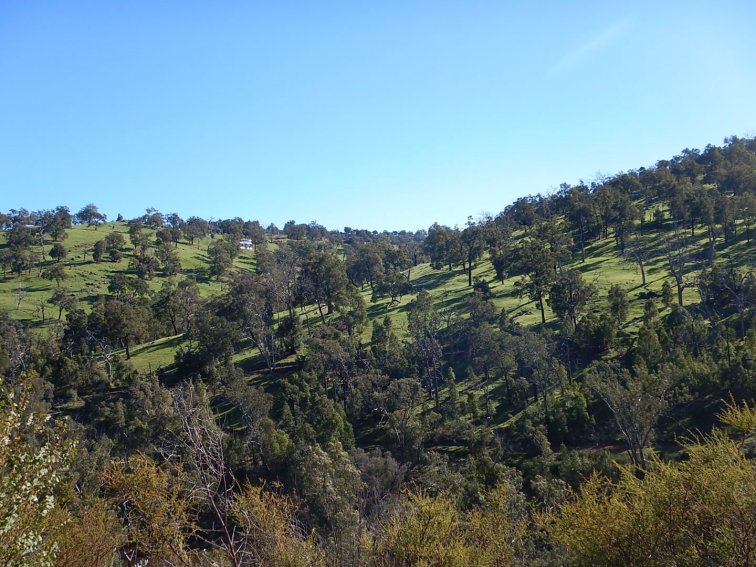 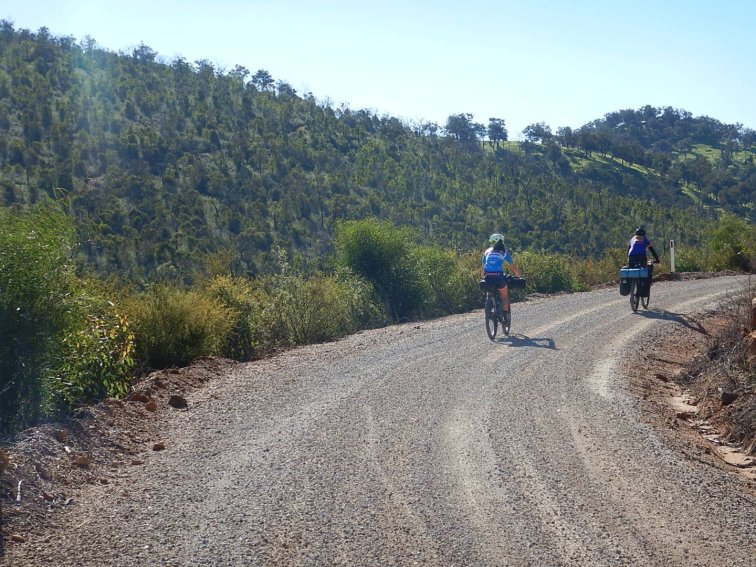 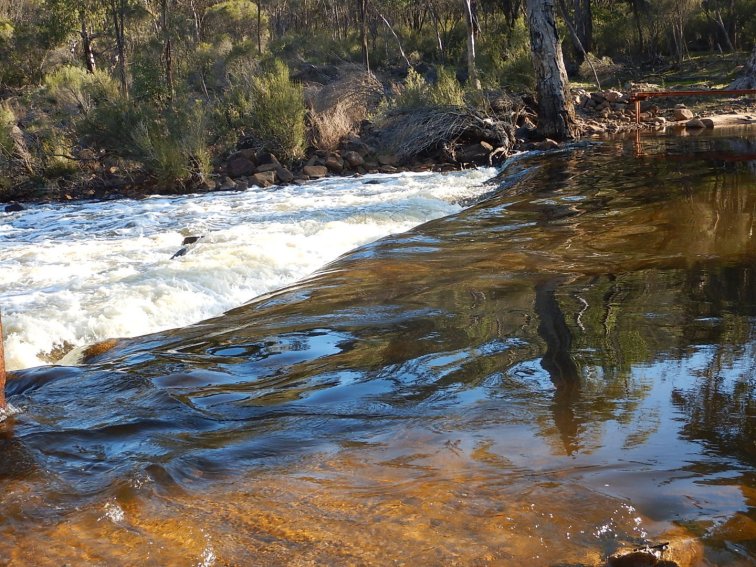 We had just over 30km on the gravel before reaching the turnoff for our campsite, the Valley camp. While the route was undulating, it was also overall tending uphill (following the river) and into a north-easterly headwind. Those in our group who had a lot of luggage weight were fnding the going a bit tough! In spite of this, we made good time, and reached the campsite at 3pm. This gave us plenty of time to select a good tent spot, set up our tents, get changed and then have a cup of tea before getting started on dinner. 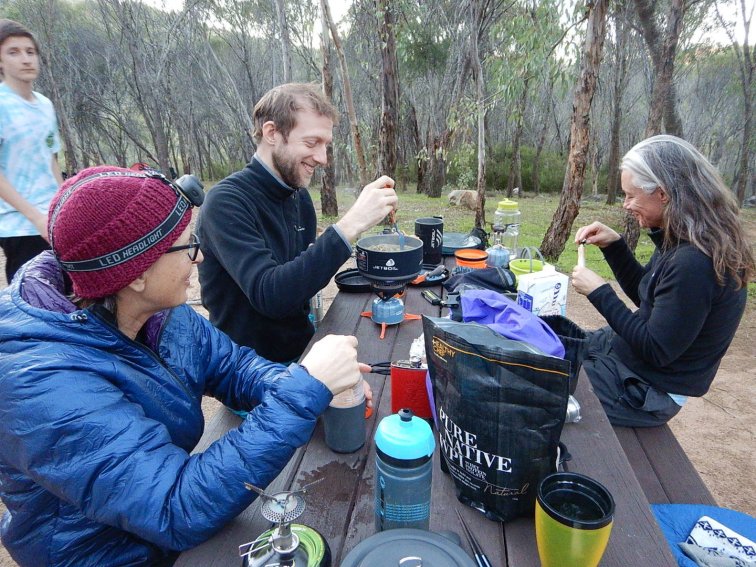 Dinner for me was rehydrated cottage pie meat mix, with rehydrated homemade mashed potatoes. This was a bit of an experiment, but was definitely a winner – although I added too much water and milk to the mashed potatoes, so they were more like potato mousse, they were yummy. 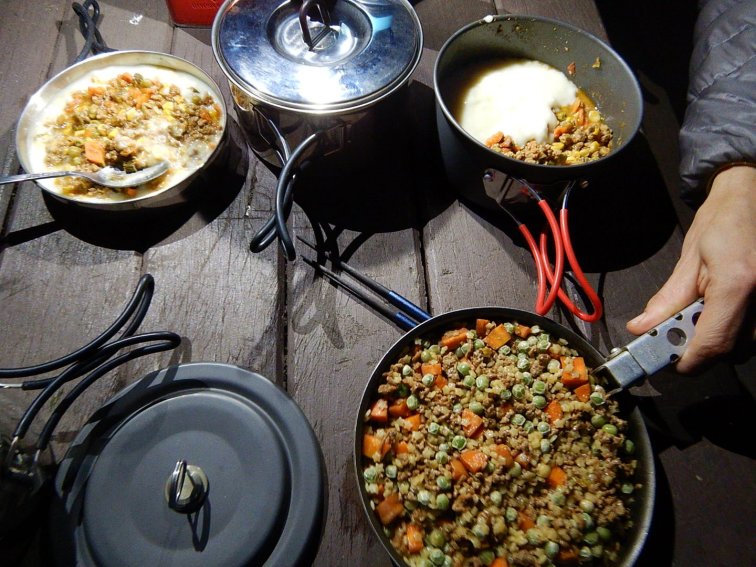 After dinner, we got stuck into proper camp activities – gathered around the fire pit, we toasted a multitude of marshmallows, washed down with mouthfuls of whisky from hip flasks. Big thanks to Alex who came up in a car and carried the firewood and marshmallows! Very important. 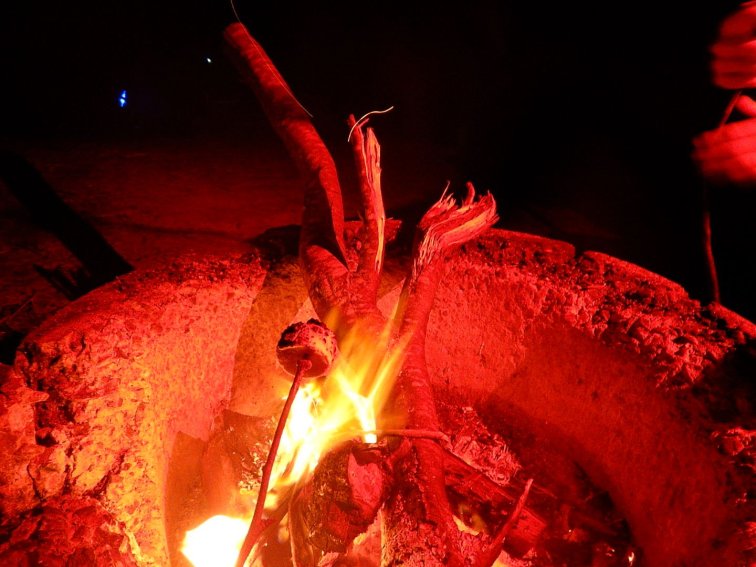 We then wandered away from the bright LED lights of our neighbouring campers, all the better to see the stars by. One of my favourite things about getting out bush is star gazing, so we were very fortunate to have clear skies and a setting new moon to create excellent star gazing conditions. After star gazing and some more time by the fire to warm up, it was the late hour of 7:30pm, so most of us decided to turn in. 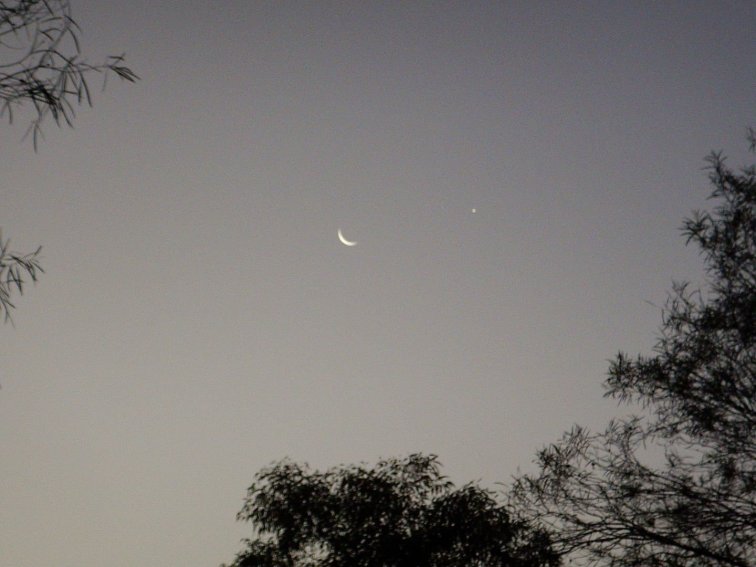 Apparently a few of our party slept through the night, which I was astonished to hear, as my sleep was disturbed by lots of noises. We had the bogans across the valley who were out shooting, so there were a couple of incredibly loud gun shots, followed by laughter. Then there were the very loud freight trains that sounded like they were close enough to run us over. And sometime in the wee hours of the morning, our neighbouring campers must have found the cold unbearable, as they got up to crank up their fire, which included chopping firewood! I think I was also a bit cold for most of the night. Normally when I’m camping I sleep only in a singlet top, with the down quilt being plenty warm enough. Well, this night I kept on my long sleeve merino top. Then throughout the night I put on my fleecy track pants. Then my woollen socks. Then my beanie. Eventually I was warm enough and got a few hours of good quality sleep, before being woken at 7am by sunrise.

We crawled out of the covers around 7:15am, packing up the sleeping mats before leaving the tent. Then breakfast (porridge and milk powder cooked up with water, with coconut flakes and dark chocolate) and Aeropress coffee for everyone. Then dishes, pack up the food bags, get changed, and pack up the tent. Then try to get everything attached to the bike in a way that won’t rub on the wheels! Bikepacking (as opposed to panniers) is much lighter and can give you more flexibility in using different bikes, but it does require more planning and time to get the luggage packed and attached. 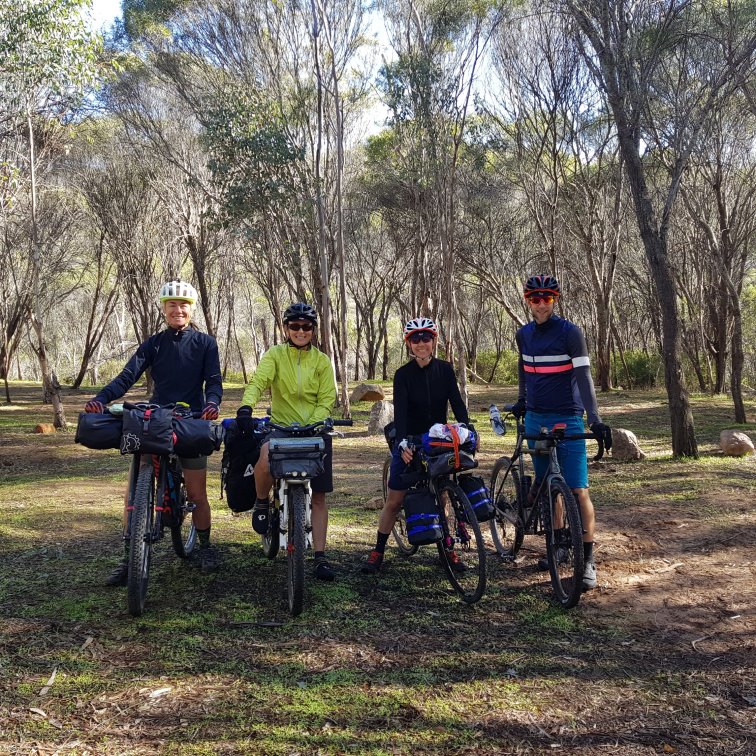 Finally we set off at 10am… only an hour later than I ideally would have liked, but I think we were mostly all ready at about the same time so at least they weren’t all waiting for me! It had been a cold morning, but we warmed up within a few kilometres of setting off, as we had the sun on our backs and it had some heat to it.

We headed back the same way we went out. We had a few stops on the way back to adjust luggage and have a couple of snacks. Other than that, we enjoyed the tailwind and overall more downhill ride, and paced ourselves so that we would have energy left for the tough climbs waiting for us at the end of the day.

Climbing out of Bells Rapids, there was a nasty climb that got to 17% gradient. I was super happy that I had a new larger cassette on my bike at this point, as I actually had enough gears to get up here without too much trouble, even with all my luggage on. Huge thanks to Richard at Vault Cycles for getting my cassette and longer derailleur fitted in record time for this weekend, it worked a treat!

Leaving Bells Rapids, we were back on the roads for the last 25km back to the cafe. The last section included 5km all uphill, quite a shock to the system after a lot of flat(ish) endurance riding. I got up the hills quite well with my lovely easy gears and relatively low bike and luggage weight. A few of the others (with an extra 15kg in bike and luggage weight) found it considerably more tough!

We arrived back at the cafe in Darlington at 2pm. Amazingly, each day my total riding time was 4 hours, so we were quite consistent. We were all in need of a good meal by the time we got to the cafe, chips have never been devoured so quickly!

It was a great weekend with good company, a really good way to escape and see some of the amazing scenery that is not that far out of the city. It was also a good test for my bikepacking setup on my cyclocross bike… more about that below.

I know everyone always wants to know about the gear, so here is what I was using: 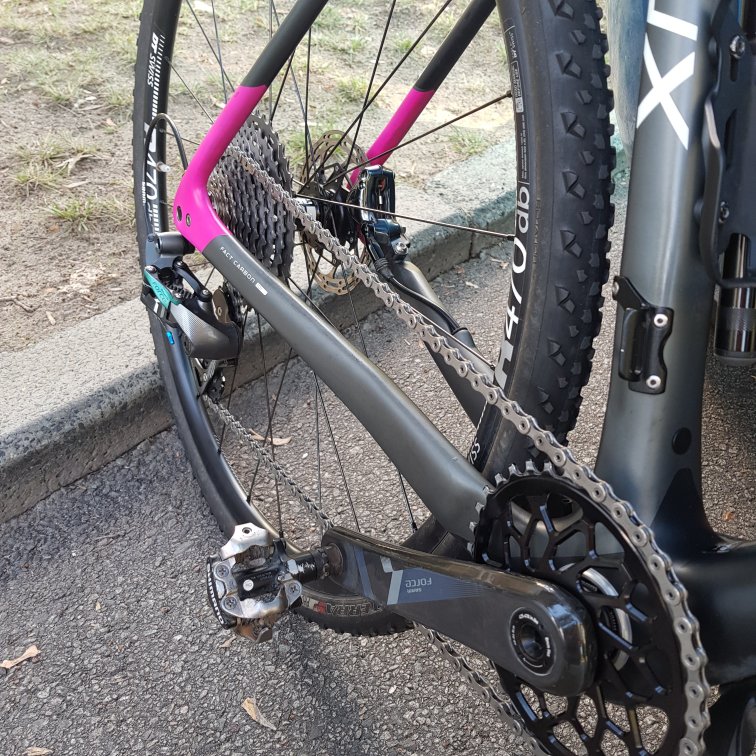 Front forks: SKS anywhere adaptors with King Cage titatium cages and Voile straps. One bag had my Nemo Pillowtop and air mattress plus tracky pants, the other bag had all my cooking gear and food. This worked well. The only change I need to make here is that the SKS Anywhere adaptors have a tendency to slip. I do have King Cage USB mounts, which are much more secure, but they are made from hose clamp and had a round profile, whereas my forks are oval-shaped. I need to figure out a way to make the USB mounts work, or fashion something similar to use. I do use non-slip matting behind the mounts as well to protect my bike. 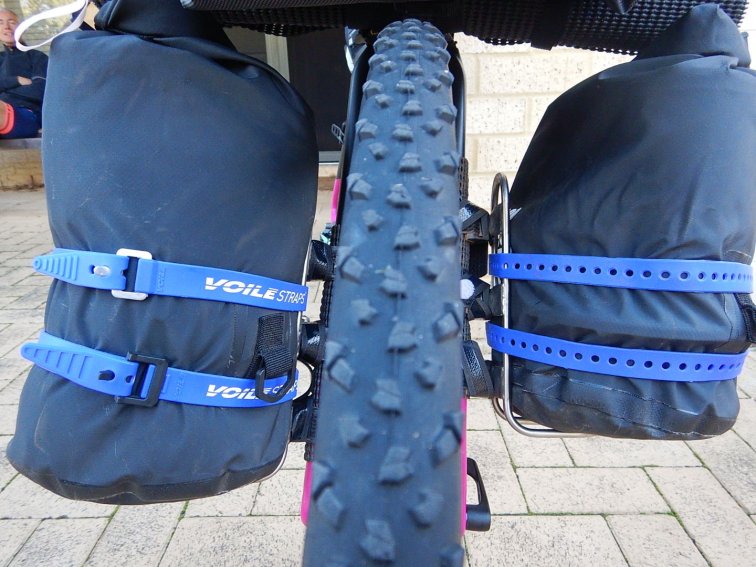 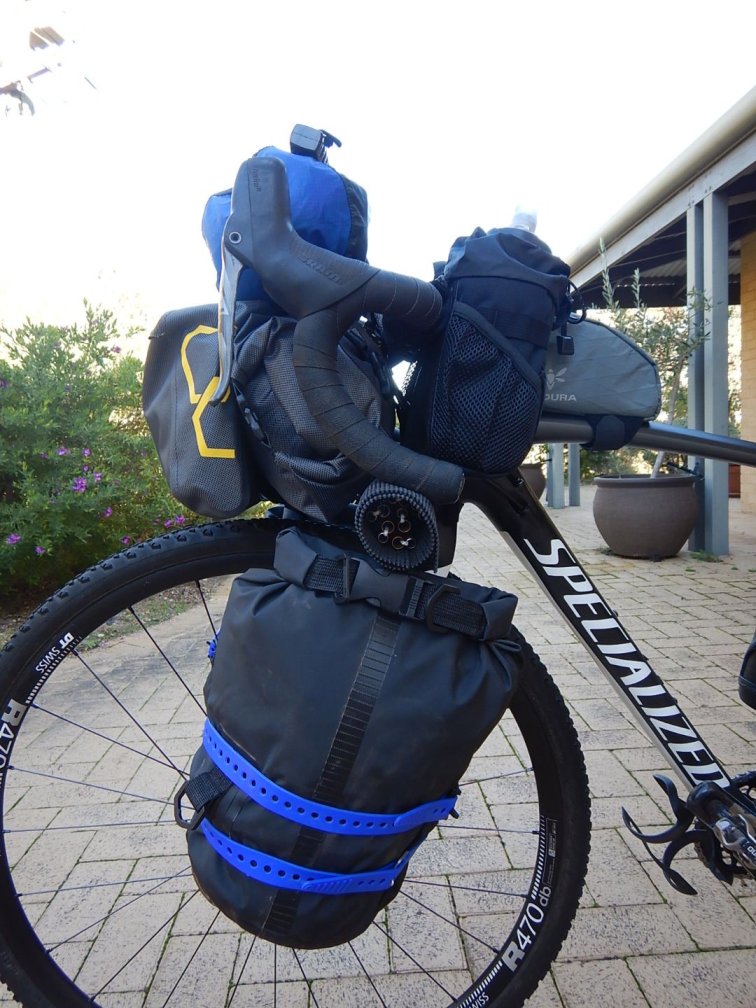 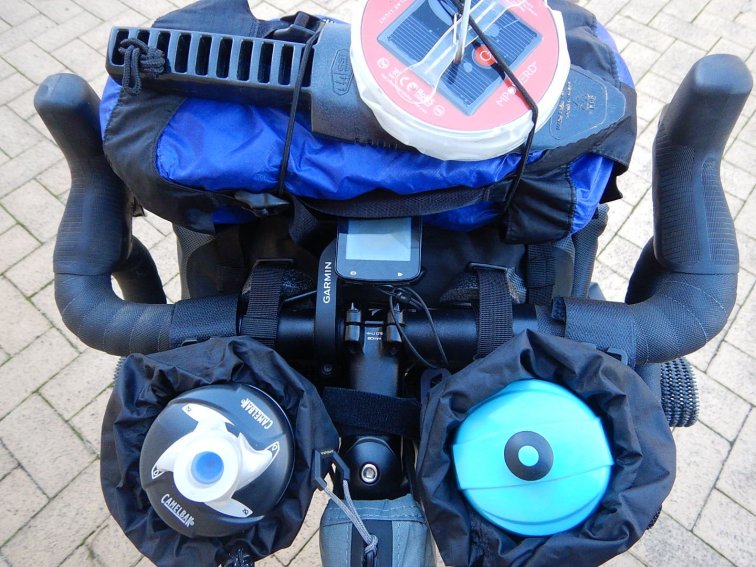 I also had two Revelate handlebar bidon bags. It was the first time I’d used these, and they worked a treat. It was great having easy access to my water bottle, plus the side pockets were perfect for storing things like extra straps, lip balm, and tissues.

Seat bag: Black Dragon seat bag. I am restricted in what I can fit in my small seat bag, but it is the perfect size for my two-man tent plus ground sheet plus pegs. 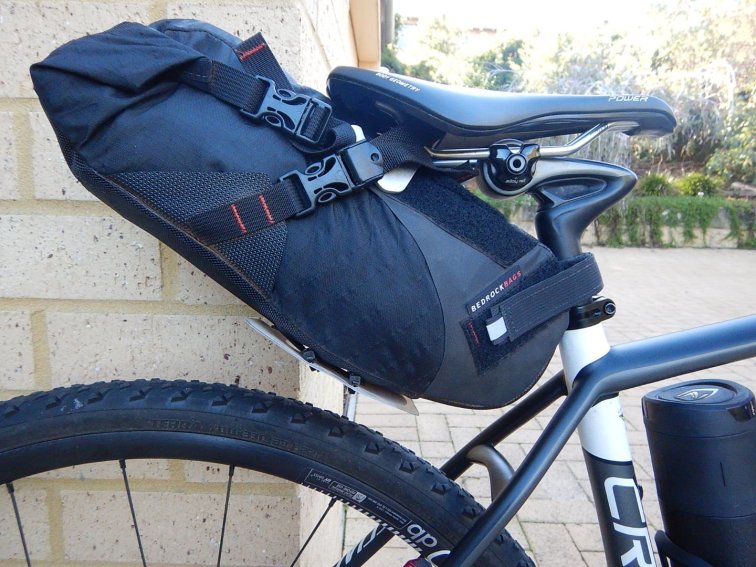 For future bikepacking on this bike, I’d like to get a custom frame bag. My plan would be to get some of the stuff off my handlebars – probably put my sneakers in the frame bag, along with bike spares and my first aid kit. Then for longer trips, I would hopefully be able to put some food in there as well.

All up I was very happy with my bike and gear setup and I look forward to more travel bikepacking trips! 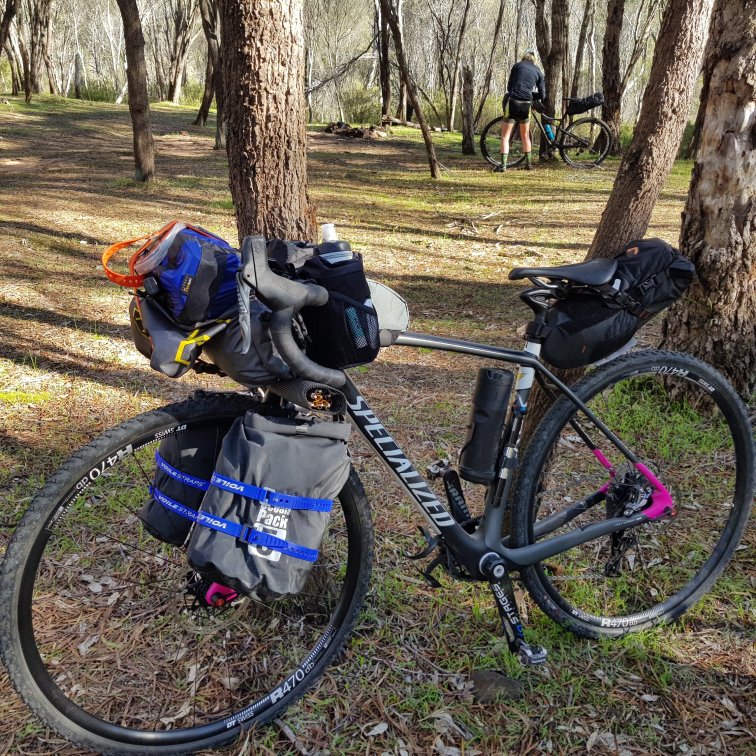